Touted for its health benefits, CBD tea is growing in availability and popularity. It tends to have a pleasant taste that resembles regular tea. But, like any tea, it can use a boost of flavor. Infused with lemon and cinnamon, this cup is refreshing, relaxing, and flavorful. It’s a simple way to brew a better-tasting and more effective cup of CBD tea from a prepared blend.

CBD tea is known for potentially relieving anxiety and pain among other ailments. Also called hemp tea, it may offer medicinal benefits to some people, though the extent of that is going to depend on the tea and the individual. Cannabidiol (CBD) is one of the active compounds found in cannabis plants. It is not tetrahydrocannabinol (THC) which produces the psychoactive high associated with marijuana—a different plant than hemp, which is used for the majority of CBD teas.

If you're hoping to maximize the effectiveness of the cannabidiol compounds in a CBD tea bag, you'll want to add fat. The CBD molecules cling to fats, which helps your body process them. Adding cream, milk, or a similar "fat" to your cup of tea maximizes the benefits you get from drinking it. 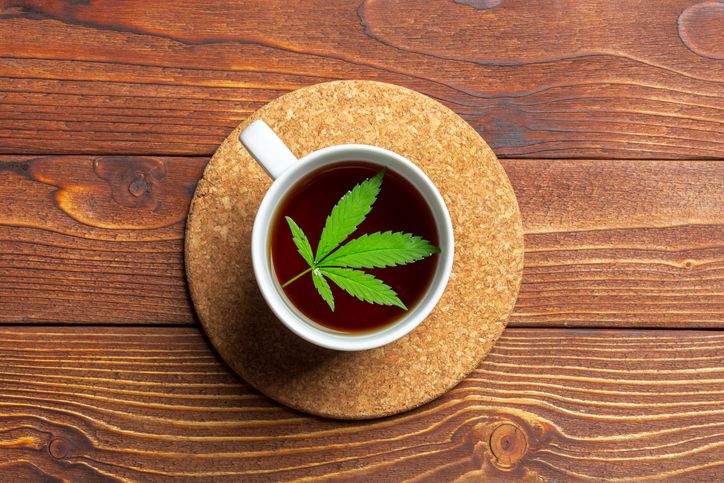 If you are using buds then slice open a teabag and fill it with the grind, so that it can steep in the water as it boiled to release the THC.

How to decarboxylate bud flowers for edibles

Bake the cannabis/hemp in the oven for 35 minutes to decarboxylate.

If you used bud grind, then gently stir the tea bag for a couple of minutes after it’s been poured before adding any flavorings like sugar, milk, honey or cream.

Weed tea has long been used as a tool to sooth common conditions like inflammation, nausea and pain, but unfortunately, cannabis is known for its THC content, which is psychoactive, resulting in many people who might benefit from a treatment, to turning it down. Not everyone can risk a reduced level of motor function or delayed reaction time, and for those that can’t, CBD products like edibles or tea can be the perfect solution.

Your CBD tea is now ready to serve and is best enjoyed while hot.

Fill a small pot with water and bring it to a rolling boil.

Thankfully, binding agents are easy to come by. Chances are you’ve already got some in your kitchen cabinets.

As you’ll see in the instructions below, you’ll add all the fat-based binding agents right from the start.

OK, now to the step-by-step.

Thankfully, the process is fairly simple. Here’s a step-by-step guide to decarboxylate your weed.

You can drink all the CBD tea you want, but without a binding agent, it’s like steeping your tea with spinach — it’ll taste weird and it won’t really do anything.

We’re going to leave it at that because, honestly, if you don’t already know what tea is, you may be too young or too inexperienced to brew a pot of your own.

For an in-depth guide on decarboxylating your marijuana, take a few minutes to read our article Marijuana Decarboxylation: Why And How To Decarb Your Weed.