32%), decreased appetite (16%-22%), diarrhea (9%-20%), and increased liver-function tests (13%). 7 Other side effects are orthostatic hypotension, lightheadedness, and dry mouth. Adverse effects appear to be dose-related. The safety of CBD in the geriatric population has not been fully clarified, and Epidiolex clinical trials did not include patients older than 55 years. 7

Endogenous cannabinoids and phytocannabinoids such as CBD and THC modulate the endocannabinoid system (ECS). THC is a partial agonist on the cannabinoid (CB) 1 receptor that results in central nervous system (CNS) effects, such as the “high” associated with marijuana; it also has limited CB2 agonist activity in the immune system. CBD has minimal activity on CB receptors, but it affects the ECS and the non-ECS. 4 Some of the proposed mechanisms of CBD include agonist activity at serotonin 1A, transient receptor potential vanilloid 1, G protein–coupled receptor 55, and adenosine A2A receptors, which may explain some of the possible analgesic, anti-inflammatory, anxiolytic, and antiepileptic effects of CBD. 1,5

Sleep Disorders: Sleep disorders are disproportionately more prevalent in older adults. 28 Patients have commonly reported that cannabis is helpful for sleep. 29 CBD is used for alleviation of insomnia, but little is known about its effectiveness. One study that compared CBD with placebo for insomnia in 15 patients suggested that 160 mg of CBD may improve sleep duration without next-day sedation. 30 Somnolence was reported in nearly one-third of patients taking Epidiolex in clinical trials, which provides additional support for CBD’s benefits for sleep in some patients. 7 However, more research is needed to determine whether CBD is useful for individual components of insomnia, such as sleep latency, wakefulness after sleep onset, sleep duration, and overall sleep quality.

In the United States, about two-thirds of states have legislation approving cannabis for recreational use (11 states) and/or medicinal purposes (21 additional states). Seven states mandate pharmacist involvement, such as dispensing activities or consulting to dispensaries. 6 The only FDA-approved (in 2018) CBD product is Epidiolex, which is indicated for treatment of seizures associated with Lennox-Gastaut syndrome or Dravet syndrome. 7 The law prohibits the sale of foods or dietary supplements to which CBD has been added; however, a wide variety of products containing CBD are available at retail stores. 8

A recent survey by the Arthritis Foundation revealed significant use of and interest in CBD for arthritis. The Foundation acknowledges the possible efficacy of CBD for treating pain, insomnia, and anxiety while also recognizing the lack of rigorous clinical studies. 36 Despite a scarcity of evidence for CBD use in the geriatric population, education on known and potential benefits and risks is vital to a patient’s decision-making process. The pervasive direct-to-consumer advertising and ubiquity of CBD products may foster misinformation or misinterpretation of actual evidence. The pharmacist should be prepared to give an unbiased assessment of CBD, including concerns about product mislabeling, underlabeling and overlabeling of CBD, and lack of THC labeling in a product containing it.

CBD absorption depends on the product formulation. In animal and human studies, CBD administered orally has been shown to be poorly absorbed, with bioavailability of 13% to 19%. 19,20 CBD’s bioavailability is believed to be reduced by first-pass metabolism. Poor bioavailability can be avoided with the use of alternative formulations. There is an emerging market for novel delivery methods to increase CBD’s oral bioavailability. 21

CBD formulations used in clinical trials include oral capsules, sublingual spray, oil-based solution, and topical gel. OTC CBD products are available in numerous other formulations, including topical balms and creams, e-liquid for inhalation, and infused foods and drinks. 1,9 Given the many formulations and manufacturers, nearly all CBD products lack standardization. The exception is Epidiolex, which is available as an oil-based oral solution formulated with sesame oil and standardized to contain 100 mg/mL of pure CBD extract. 7

Cannabidiol (CBD) and delta-9-tetrahydrocannabinol (THC) are among the many cannabinoids, or components, of the Cannabis sativa plant. CBD is nonpsychoactive, whereas THC has psychoactive properties such as euphoria and psychosis. Two common strains of Cannabis sativa are marijuana and hemp. 1 CBD may be derived from either marijuana (which often contains more than 15% THC) or hemp (having a THC concentration of no more than 0.3%). 2 In addition, CBD may be extracted from Cannabis indica and hybrid plants, which may have higher concentrations of CBD than THC. A recent survey revealed that one in seven Americans uses CBD products, with the most common reasons for its use being pain, anxiety, poor sleep, and arthritis. 3 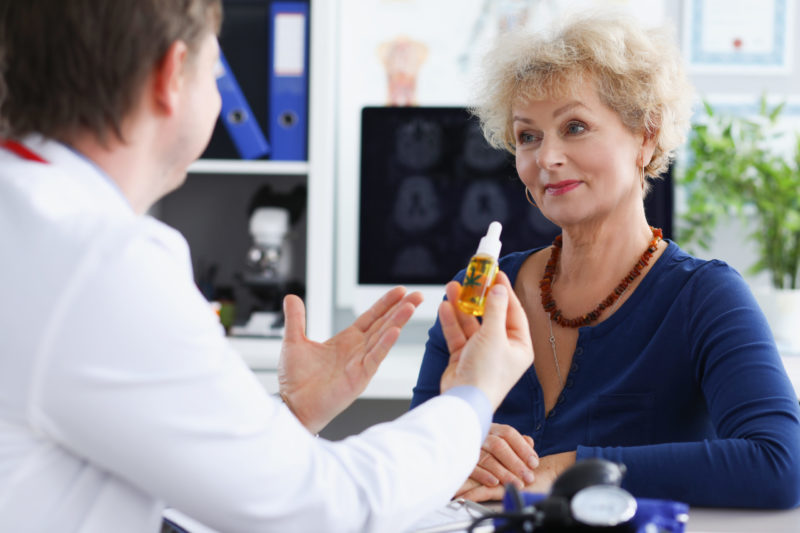 CBD has many positive effects regardless of age. When used as an adjunct to treatment, it relieves pain associated with chronic inflammatory diseases. It is also often prescribed to patients undergoing chemotherapy or radiotherapy to calm nausea and vomiting. For seniors who suffer from sleep disorders, whether it be difficulty falling asleep or staying asleep, it is very useful thanks to its relaxing effects. CBD will also relieve chronic pain associated with old age such as osteoarthritis.

Cannabis is widely stigmatised, but its use in a controlled setting and with the support of a doctor can be very beneficial, especially for older people. For For the elderly, the use of therapeutic cannabis can help them to better cope with their illnesses, treatments or simply the pains that appear with age.

Taking CBD is quite practical as it comes in many forms: topical cream, herbal tea, oil, capsules.

First of all, it is necessary to understand the difference between tetrahydrocannabinol (THC) and cannabidiol (CBD). Both are cannabinoids, i.e. chemical compounds secreted by the cannabis plant that act on the human body.

CBD is proving to be very interesting for everyone, but it can really make a difference for seniors, as it relieves the aches and pains of old age.

THC is the active substance in cannabis that causes psychotropic effects. It is this molecule that gives you a “high” and that is why THC is considered a drug. THC causes many problems: it is not only addictive but also has negative effects on the body. It can also lead to a “bad trip”, to anxiety and panic attacks.

CBD stands out for its therapeutic properties. This molecule has no psychotropic effects, but has a sedative effect that counteracts THC and limits its effects. Studies have shown that CBD has pain-relieving and anti-inflammatory properties. Moreover, it is not addictive. This is why it is approved for sale.

Research in this area is still in its infancy, but the effects of CBD are promising on various levels. However, you should not self-medicate and always seek advice from your doctor.