You may have seen a sign in your local pet store or dispensary advertising CBD — the chemical compound in cannabis that doesn’t get you high and has shown multiple health benefits in people — for pets. Cannabis businesses are flocking to the $30 billion pet market, offering CBD dog supplements and other pot-infused wellness products for animals. As California joins seven other states in legalizing the plant for adult use, pet owners, veterinarians and dispensaries are looking at how cannabis might benefit animals.

The problem is that while physicians can recommend (but not prescribe) cannabis for their human patients, California veterinarians are legally prevented from giving pet owners advice or recommendations regarding the use of medical cannabis. While all cannabis, even CBD, is still federally illegal, pet owners can purchase and give CBD to their pets in legal states. But depending on their state rules, vets may risk losing their licenses if they broach the subject.

As with many things cannabis, when it comes to pot for pets, the rules have not caught up with the science, the business or the culture.

But what do veterinarians think about the safety and benefits of marijuana for animals?

Dr. Gary Richter, 47, a veterinarian of 20 years, is the owner and medical director of both Montclair Veterinary Hospital and Holistic Veterinary Care of Oakland. Richter has been outspoken on the topic of cannabis for pets, researching its uses for the past three years.

Richter is part of a movement among vets to change the regulations so that vets can oversee medical cannabis for animals. The movement was started largely by Dr. Doug Kramer, a Los Angeles vet who paved the way for the topic before he died in 2013.

Richter gave a presentation on cannabis for animals before the California Veterinary Medical Association in October. The issue is “at the forefront of the conversation in the veterinary world right now,” he said, as legislation will be debated over the next few months.

“While there are some differences in how cannabis affects pets compared to humans, they can benefit in many of the same ways people do,” Richter said. He adds that his professional experience “has shown me that there is enormous potential to treat medical conditions with cannabis.”

But Richter warns that while CBD is medically beneficial, THC, the chemical compound in cannabis responsible for the “high” effect, can be dangerous to animals. THC overdoses in dogs in particular lead may to medical complications and, in extreme cases, death. He believes cannabis should be given to pets only as a medicine, based on a veterinarian’s professional analysis and dosages to prevent complications.

Liz Hughston, a 47-year-old vet in San Jose, and founder and head technician of VetTechXpert, is also an administrator of the Veterinary Cannabis Academy on Facebook and an advisory board member for Phyto Animal Health (a division of Medical Marijuana Inc.), which produces hemp CBD oil for pets.

She first grew interested in pot for pets after her dog reacted badly to a pharmaceutical anxiety medication her vet at the time recommended. Cannabis supplements did wonders, she said, without the side effects of the drug.

She says people are giving cannabis to dogs and cats to reduce noise phobia, anxiety and itching; control pain, especially with arthritis; lessen the severity and frequency of seizures; and treat many other conditions.

The wiring that makes cannabis effective in humans and animals is called the endocannabinoid system, a series of receptors in the human brain and throughout the body that regulate many physiological processes like pain, mood, appetite, memory and more.

“Every animal with a spinal column also has an endocannabinoid system, so it stands to reason that cannabis can help many species,” she said. “I think we’ve reached an inflection point in society now where cannabis use in humans has become much more widespread and accepted. People see the good it does in people and want to provide the same benefits to their pets.”

Robert Silver, a retired veterinarian of 35 years from Boulder, Colo., is also a veterinary herbalist and past president of the Veterinary Botanical Medical Association. He has spent years of his career advocating for the veterinarian use of hemp, and more recently cannabinoids. He consults with the hemp company Folium Biosciences as their chief veterinary officer and the veterinary nutraceutical company RxVitamins as chief medical officer.

Silver, 68, was skeptical about medical marijuana, but over the years began to see how animals benefit from cannabinoid treatments.

“As I explored the phytopharmacological aspects of this plant, I fell in love with it,” he said. 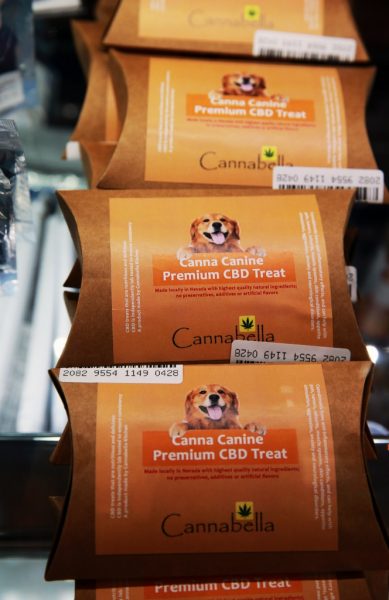 Unlike in California, the Colorado Veterinary Medical Association (CVMA) recognizes “the potential benefits of marijuana therapies,” so Colorado allows its vets to offer cannabis advice. After Colorado legalized marijuana in 2012, Silver observed animals undergoing cannabinoid therapies and recovering from conditions that had been hard to treat with either conventional or other integrative medicine approaches.

Silver said he has seen cancer tumors shrink and many go into complete remission with cannabis, noting that in some cases CBD will do the trick, and in others a blend of THC and CBD works best. He’s also seen dogs that have been given CBD in place of their prescribed arthritis medication “do better than on the NSAIDs.”

He’s also observed dogs with low-grade seizures who were able to stop their anticonvulsant therapies by switching to cannabis, but notes that this doesn’t happen in every case and cautions that it is always dangerous to take an animal off a prescribed seizure medication.

You may also enjoy...